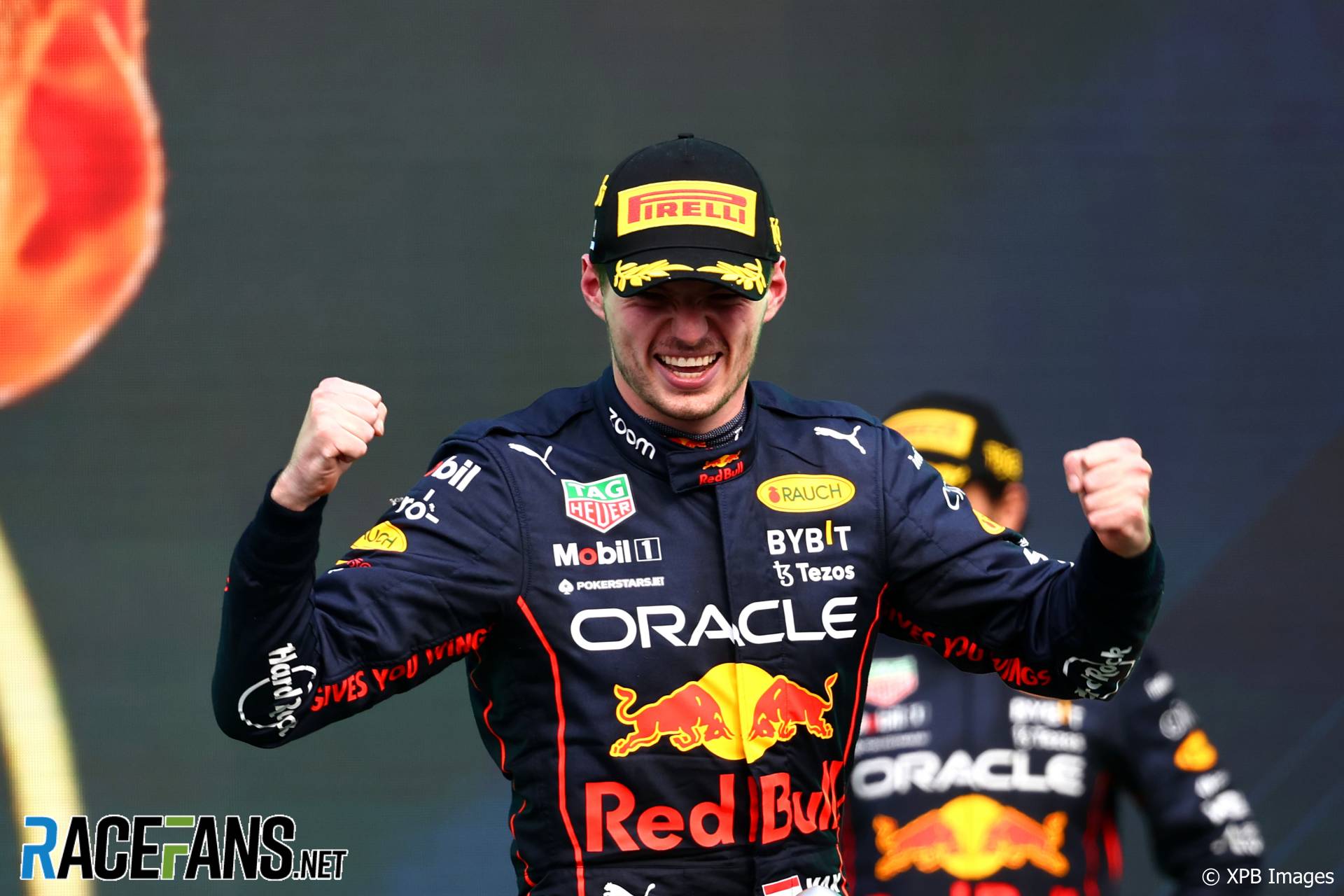 Max Verstappen won the Mexican Grand Prix from pole position after beating Lewis Hamilton with a long second stint on medium tyres to set a new record of 14 wins in a single season.

Mercedes gambled on hard tyres to try chase down Verstappen, but the world champion managed his mediums after his solitary pit stop until the end of the race, winning by 15 seconds over Hamilton. Sergio Perez took another home podium in third.

Verstappen started from pole on soft tyres, with the two Mercedes of George Russell and Hamilton behind on mediums. When the lights went out, Verstappen got a decent start and led on the run to turn one. Russell tucked into the Red Bull’s slipstream and pulled to the outside into turn one, but Verstappen held onto the lead as Hamilton took advantage to take second from his team mate into turn three, before Perez passed Russell for fourth into turn four.

Verstappen led with his soft tyres, with Hamilton maintaining a gap of around 1.5 seconds to the leader in the opening laps. After 20 laps, Verstappen began to report that his tyres were degrading. However, it was his team mate Perez who was the first of the leaders to pit at the end of lap 23. A delay on the left-rear cost him valuable seconds and he rejoined in sixth on medium tyres.

Russell inherited the lead from his team mate and asked his team to extend his first stint. Mercedes obliged him, but only until the end of lap 34, when they also brought him in for hard tyres, handing the lead back to Verstappen. With the advantage of faster tyres, Perez in third got to within two seconds of Hamilton in second, but could not get close enough to attempt a pass.

Daniel Ricciardo collided with Yuki Tsunoda at turn six as the pair battled over 11th place, the McLaren’s front left wheel clipping the rear right of the AlphaTauri and bouncing Tsunoda briefly into the air. Tsunoda’s car was damaged in the impact and he was forced into the pits to retire. After a quick investigation, Ricciardo was handed a ten second time penalty by the stewards.

Out in the lead, Verstappen was keeping his medium tyres in a healthy condition and did not drop off in lap time as Mercedes may have hoped he would. In the closing laps, Fernando Alonso pulled off at turn one reporting a power unit failure, which brought out a brief Virtual Safety Car. None of the leaders pitted, however, and the positions remained the same when the race resumed less than a lap later.

Verstappen ticked off the remaining laps of the race and took the chequered flag to win and set a new record for most wins in a single season. Hamilton finished second, 15 seconds behind, with Perez completing the podium in third place.

Russell finished fourth after pitting on the penultimate lap to chase the fastest lap, which he achieved, finishing ahead of the two Ferraris of Carlos Sainz Jnr and Charles Leclerc. Ricciardo crossed the line in seventh and after pulling a gap of more than ten seconds over Esteban Ocon behind, he kept the position after his ten second penalty was applied. Lando Norris and Valtteri Bottas completed the top 10.