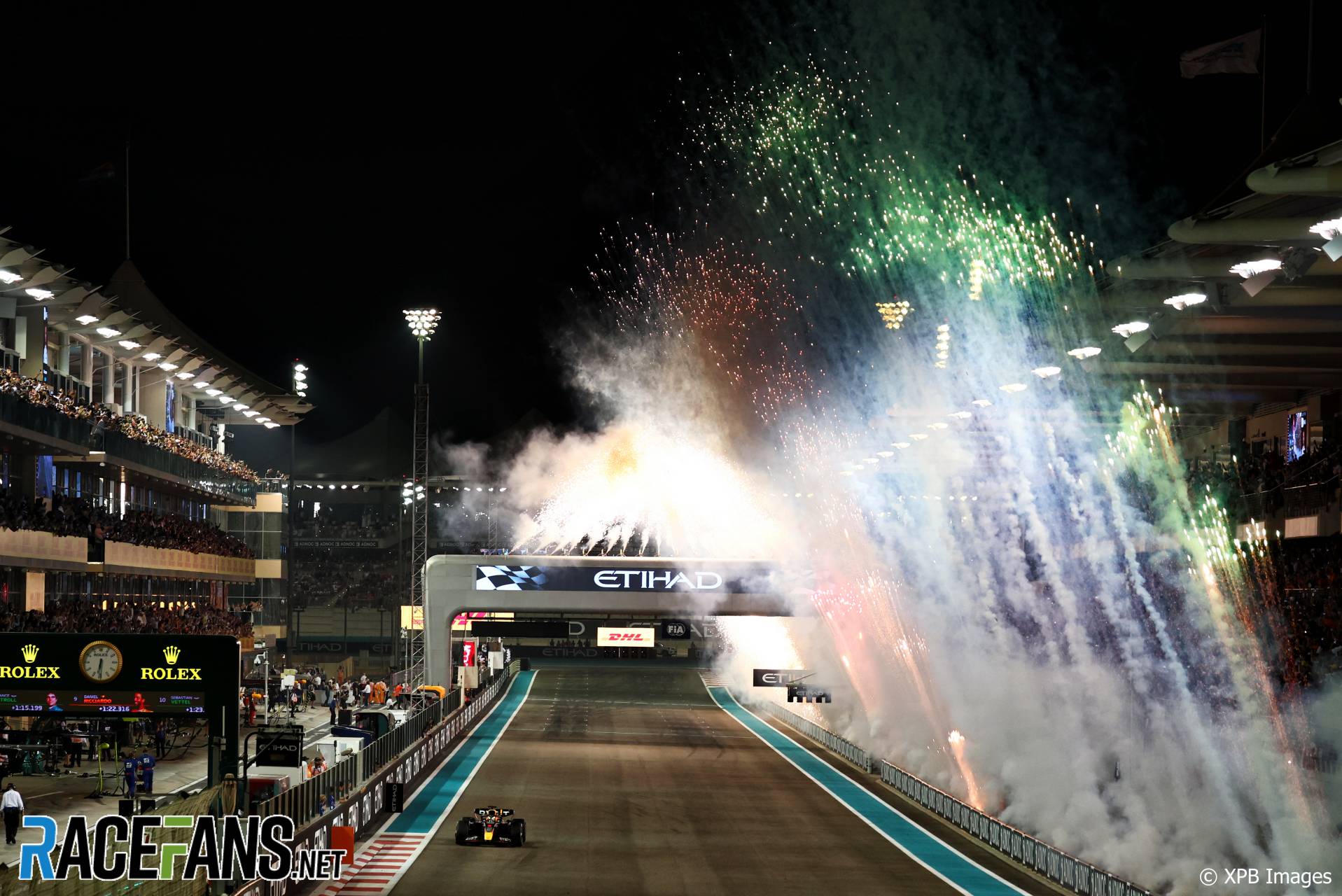 Max Verstappen expertly managed his pace to turn a one-stop strategy into victory in the Abu Dhabi Grand Prix ahead of Charles Leclerc.

Verstappen and Leclerc managed their tyres to secure the top spots on the podium while Sergio Perez only just failed to catch Leclerc on the final lap, taking third place after pitting a second time.

As the lights went out for the final time in the 2022 season, Perez challenged Verstappen into turn one, but Verstappen held the lead. Behind, Leclerc held onto third position to settle in behind the two Red Bulls.

Lewis Hamilton passed Carlos Sainz Jnr for fourth place, but Sainz dived down the inside of the Mercedes into turn six, bouncing over the kerbs and through the escape road, retaining the position. Mercedes instructed Hamilton to hand the position back after they were told by the FIA that they would receive a five-second time penalty if they did not.

Having returned the position to Sainz on lap four, Hamilton used DRS to pass the Ferrari into turn nine for fourth. Sainz was soon under pressure from George Russell behind, but managed to break out of DRS range of Russell and back into DRS range of Hamilton ahead. Sainz overtook Hamilton to take back fourth on lap eight, before Russell passed his team mate on the following lap to demote Hamilton to sixth.

Perez fell away from his leading team mate and into the clutches of Leclerc behind. As soon as Leclerc was within DRS range at the end of lap 15, Red Bull called Perez into the pits, switching him to hard tyres. Russell also pitted for hards but after a slow stop was released in front of Lando Norris, receiving a five second time penalty as a result.

Verstappen made his pit stop at the end of lap 20, moving onto the hard tyres and rejoining in second place, less than a second ahead of team mate Perez. Leclerc was the final of the front runners to make his stop a lap after Verstappen, rejoining the track just ahead of team mate Sainz in third.

Leclerc kept in touch with the two Red Bulls and was instructed to pit for a second time at the end of lap 33, but stayed out when Red Bull pre-empted Ferrari and brought Perez in instead for a second set of hard tyres. Perez emerged in sixth behind the Mercedes and was immediately the fastest car on the track.

With Perez out of Leclerc’s way, Ferrari kept Leclerc out on track, with Verstappen continuing out in the lead. Mick Schumacher collided with Nicholas Latifi at the turn five hairpin, briefly bringing out the yellow flags. Fortunately, the pair managed to resume without the need for any Safety Car intervention.

Sainz and Russell followed Perez by pitting a second time – Sainz for hard tyres and Russell for mediums, serving his five-second time penalty. Perez caught up to Hamilton and overtook him into turn six, but Hamilton countered with DRS to move back into third approaching turn nine. Two laps later, Perez used DRS to complete the pass into turn nine.

With 12 laps remaining, Perez had a gap of nine seconds to make up to Leclerc in second. With six laps remaining, the gap had reduced to five seconds. Four laps from the end of the race, Hamilton reported he had lost gears on his car and slowed on track, pulling into the pit lane to retire.

Verstappen checked off the final laps and crossed the line to win the race and secure his 15th victory of the season. Leclerc held on to take second place in the race and the championship, just over a second ahead of Perez in third.

Sainz took fourth in the second Ferrari, ahead of Russell in fifth and Norris in sixth. Esteban Ocon came in seventh, followed by Lance Stroll. In what could be their final races in Formula 1, Daniel Ricciardo just beat Sebastian Vettel to ninth place. A double points finish for Aston Martin meant they finished equal on 55 points to Alfa Romeo, the latter claiming sixth place in the championship on count-back of results.