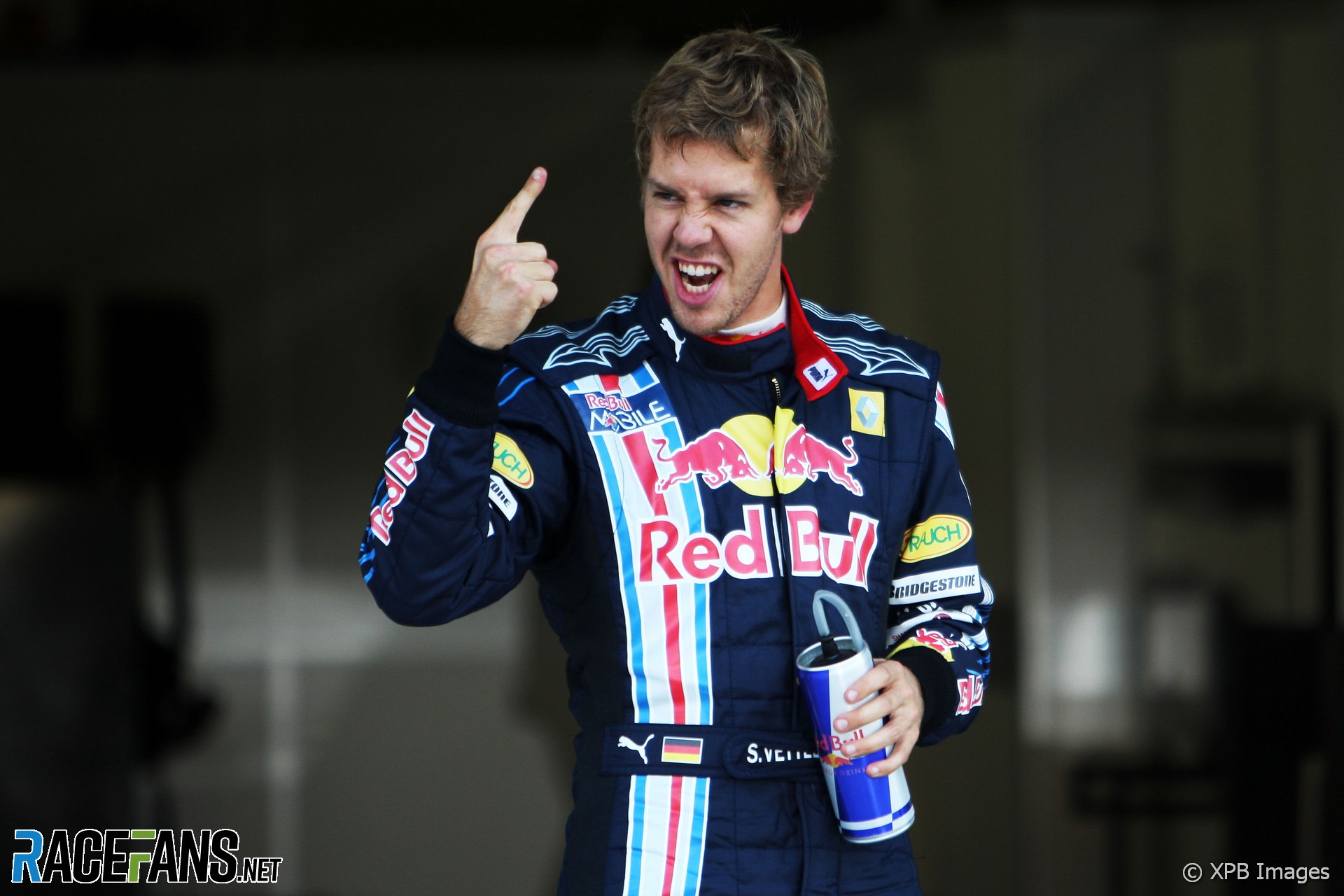 The 35-year-old departs F1 as the outright holder of 11 notable records in the world championship. He shares one more with another driver, and has held nine other records during his 299-race career.

Most wins in consecutive races

In 2013, Vettel won nine races in a row to break a record set in 1953 for consecutive wins. The Red Bull driver eclipsed the record by two after winning the Belgian, Italian, Singapore, Korean, Japanese, Indian, Abu Dhabi, United States and Brazilian grands prix.

While Alberto Ascari started and won nine races in a row through 1952 and 1953, these were not all consecutive rounds of the world championship – he didn’t race in the 1953 Indianapolis 500.

Most pole positions in a season

During his second title-winning campaign in 2011, Vettel claimed pole for 15 out of 19 races. He also matched Nigel Mansell’s 1992 record by winning nine of the races he started from pole.

The following year, now a Red Bull driver, Vettel became the youngest driver to achieve a ‘hat-trick’ of win, pole and fastest lap at the British Grand Prix, aged 21 years and 353 days.

Vettel was just 23 years and 134 days old when he became world champion for the first time in the 2010 Abu Dhabi Grand Prix. With his next three titles coming in the years immediately after, it meant in successive years he broke the record for the youngest driver to be a double, triple and four-times F1 champion.

Most laps led in a season

No statistic demonstrates Vettel’s domination of 2011 better than the fact he led 739 laps out of 1,133. On 11 occasions he met the chequered flag as winner that year. To put that into perspective, Max Verstappen led 616 laps this year, in a season which had three more races.

Championship leader for most races in a season

Most wins in a season

Vettel and Schumacher both achieved 13 wins in a single year, in 2013 and 2004 respectively. For a long time this seemed out of reach, despite Mercedes’ dominance, as Hamilton and Nico Rosberg took many wins from each other between 2014 and 2016.

But once Red Bull made a Mercedes-beating car again, Verstappen knew this was one he could take. He duly reached 14 wins at last month’s Mexican Grand Prix then added a 15th in Abu Dhabi.

Podiums in a season

Most points in a career

Vettel first put his name on this record at the 2015 Hungarian Grand Prix, albeit equal with Fernando Alonso. It wasn’t until two races later that he claimed it outright at the Italian Grand Prix.

The record wasn’t his for long, however. Hamilton matched Vettel at the 2016 Canadian Grand Prix, Vettel claimed the record back a week later at the European Grand Prix, then the race after Hamilton reclaimed it and it has remained with him ever since. Vettel ends his F1 career still second in the all-time points-scoring table: Hamilton on a towering 4,405.5, Vettel on 3,098, Alonso 2,061 and Verstappen closing quickly on 2,011.5.

Most points in a season and consecutively scored

Two more records that were earned in 2011 and lost to Hamilton in 2018. Vettel scored 392 points in 2011, then scored five more than that during his fourth title-winning season two years later. Hamilton went nine better on the way to his fifth title.

From the 2010 Brazilian Grand Prix to the next year’s Indian Grand Prix, Vettel scored 424 points without interruption. In a run from 2016-18, Hamilton scored 199 more.

Front rows in a season

Verstappen’s maiden F1 win at the 2016 Spanish Grand Prix broke three of Vettel’s records. The first was achieved on lap 11 of the race when he became the youngest driver to lead a lap, a record set by Vettel at the 2007 Japanese Grand Prix when he was 20 years and 89 days old.

When Verstappen reached the chequered flag at Barcelona, the 18-year-old beat Vettel’s records as F1’s youngest podium finisher and winner, both achieved at the 2008 Italian Grand Prix.

Vettel finished his first F1 race, the 2007 United States Grand Prix, in eighth place for BMW Sauber and became the first ever teenager to score points in F1. Daniil Kvyat beat the record by 25 days on his debut in 2014.

Youngest to participate in and top a grand prix weekend session

BMW Sauber gave Vettel a run in two practice sessions at the 2006 Turkish GP when he was just 19 years and 53 days old. Remarkably he topped the second by 0.073 seconds.

Verstappen broke the first record on his practice debut at the 2014 Japanese GP, three days after his 17th birthday, then went fastest in a practice session for the first time at the 2015 Mexican GP a month after turning 18th.

And the unwanted record…

There is one record of Vettel’s which his rivals won’t want to take from him: He incurred his first F1 penalty quicker than any other driver.

During that race weekend debut at Istanbul Park, Vettel was caught speeding in the pit lane just six seconds after beginning his F1 career, and was penalised.