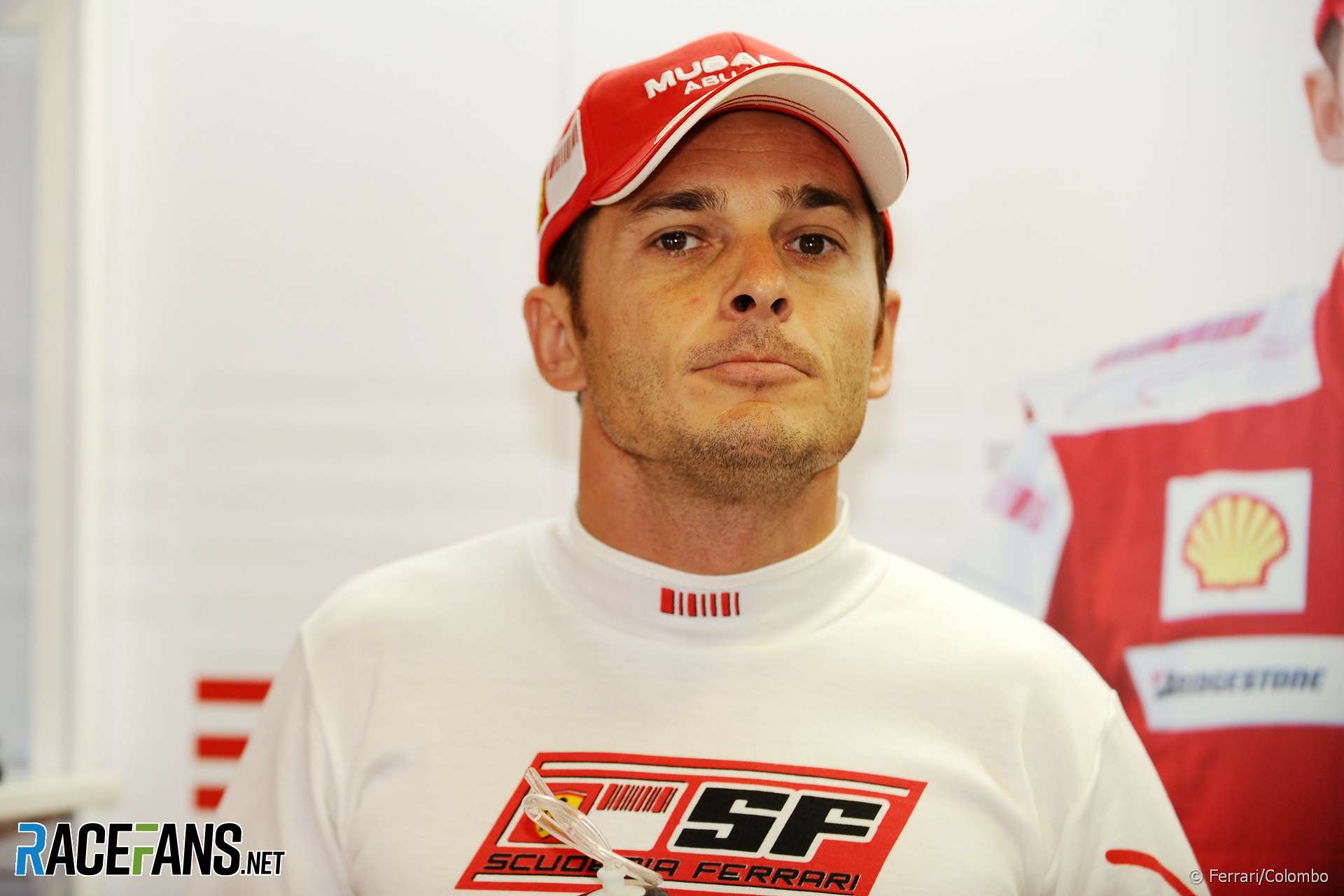 Following an impressive karting career, Giancarlo Fisichella stepped up to Italian Formula Three in 1992. He won the title two years later with 10 race wins plus victory in the Monaco Formula Three race.

After that he raced in the short-lived International Touring Cars series (part of the former German Touring Car championship) in 1995 and had a test for Minardi.

That opened the door for Fisichella to make his grand prix debut for the team. However he only lasted eight races in the car. While Fisichella gave the team their best result of the year with eighth place at Montreal, he was replaced by Giovanni Lavaggi, who brought money to the cash-strapped outfit.

He’s made his mark, however, and better opportunities lay ahead.

Fisichella had attracted the attention of Flavio Briatore, who moved him to Jordan for 1997. He impressed against team mate Ralf Schumacher, though the inexperienced pair did not get on, especially after they tangled during the Argentinian Grand Prix.

However Fisichella made his mark with a superb drive at the Hockenheimring, challenging Gerhard Berger’s Benetton for victory, until a puncture cost him a likely second place.

Briatore moved him to Benetton for 1998. However it proved an ill-timed move: while Jordan scored their first victory that year, Berger’s Hockenheim win was Benetton’s last.

While Benetton spiralled into a slump which lasted until their takeover by Renault in 2001, Fisichella rode the drop all the way to the bottom in 2001, though he generally out-performed team mates Alexander Wurz (1998-2000) and Jenson Button (2001).

In 2002 Fisichella returned to Jordan in a straight swap with fellow Italian .Jarno Trulli. His timing proved little better the second time around as Jordan, having won races in 1998 and 1999, were heading into a slump of their own.

But with some fine wet-weather driving and a slice of luck Fisichella claimed his first win in the 2003 Brazilian Grand Prix – although it took the FIA stewards until a few days after the race to hand the trophy from Kimi Raikkonen to Fisichella.

He switched to Sauber for 2004 where he partnered Felipe Massa, out-scoring the young Brazilian 22-12. It proved the stepping stone that would finally put him in a top-line team.

For 2005 he returned to the Renault to partner Fernando Alonso, but although he went into the season with 142 race appearances to Alonso’s 51, and won the first race of the year, it was Alonso who stormed to the championship. Fisichella ended the year on 58 points, fifth overall, to Alonso’s 133.

It was the same story the following year – another win, again on a day when Alonso’s starting position had been compromised, while his team mate won the championship. However as Alonso headed to McLaren for 2007 Fisichella was retained to partner newcomer Heikki Kovalainen.

Kovalainen proved no soft touch either, and although Fisichella coped better with the less competitive R27 in the early part of the season, Kovalainen scored Renault’s only podium finish and beat Fisichella in the points. Neither driver was retained, and Fisichella found himself short of options.

For 2008 he found himself back once again at the team formerly known as Jordan, now owned by Vijay Mallya and re-named Force India ahead of their debut.

In the un-competitive VJM01 Fisichella never troubled the scorers, and inevitably found himself caught up in first-lap tangles, such as at Istanbul, where he launched over the back of Kazuki Nakajima’s Williams. When opportunity afforded him the chance to run with the front runners at Singapore, Monza and Interlagos he proved he still had it in him.

Fisichella started the 2009 season with Force India but by the end of the year he was driving for the team he had long dreamt of joining – Ferrari.

Early in the year it was clear Force India’s form was improving, largely thanks to a new technical collaboration with McLaren which included a supply of Mercedes engines. Fisichella got within touching distance of a points finish at several races early in the season.

But it was after a new upgrade was put on the car at Silverstone that the VJM02 began to show impressive pace, particularly at quicker circuits. Fisichella duly put the car on pole position at Spa and finished second – losing out to Kimi Raikkonen’s Ferrari by less than a second.

At the next race Fisichella was Raikkonen’s team mate, as Ferrari brought him in as a replacement for substitute driver Luca Badoer. Fisichella struggled to come to terms with the F60 and finished the season without scoring any more points.

He remained with Ferrari in 2010 as a test driver and drove for them in sports car racing but his F1 race days were over.